Did you know all of the District’s drinking water comes from groundwater? The District provides drinking water to over 14,000 homes. Water is pumped from 14 wells around the South Lake Tahoe area, disinfected and then immediately delivered to houses and stored in water tanks. Our groundwater originates right here in the Lake Tahoe watershed where we live. Snow falls in winter, melts in spring, and travels through a vast network of groundwater aquifers to Lake Tahoe. By pumping water from these aquifers, the South Lake Tahoe area has some of the tastiest and purest water in California.

By stepping up to serve as the GSA for the Tahoe South Subbasin, the District and the Water Agency have the primary say, and responsibility for, managing South Tahoe groundwater, instead of the State.

The District has a long history of working to protect our groundwater. In 2000, the District enacted its first groundwater ordinance and a Groundwater Management Plan (Plan) was adopted which focused on the impact of man-made groundwater contaminants on District wells. At that time, groundwater quality was being degraded by spills and releases of gasoline containing Methyl tert-butyl ether (MtBE) and dry cleaning solvents containing Tetrachloroethylene (PCE). The District developed a Plan to address these contaminants while continuing to provide high quality drinking water to the South Lake Tahoe area.

The District and El Dorado Water Agency are in the process of updating the 2014 Groundwater Management Plan for resubmittal to DWR by January 1, 2022.   Follow the link to learn more about how you can participate in the update process, read through Plan Documents, and receive Public Notices related to the update process.

In 1989, the contaminant tetrachloroethylene (PCE) was first found in drinking water wells near the intersection of Highways 50 and 89, referred to locally as the South “Y” area. Today, the PCE remains in groundwater and forms a contaminant plume believed to cover an area of more than 400 acres. PCE is a manmade chemical that was used from the early 1960s through the mid-1980s as a solvent for dry cleaning clothes and degreasing metal. During the late 1980s, concerns about the toxicity of PCE led Federal and State environmental agencies to list PCE as a probable carcinogen and as a toxic pollutant. Presently, five public drinking water wells in the South “y” area  have been impaired by the PCE Plume. None of District’s wells are currently affected. When PCE is detected in a well, the well is shut down and treatment is added to remove the contaminant; or an alternative source of drinking water supply is provided. Water suppliers and regulatory agencies in the South Lake Tahoe area are working together to protect and sustain our groundwater resource ensuring that safe drinking water is provided to all of our customers. 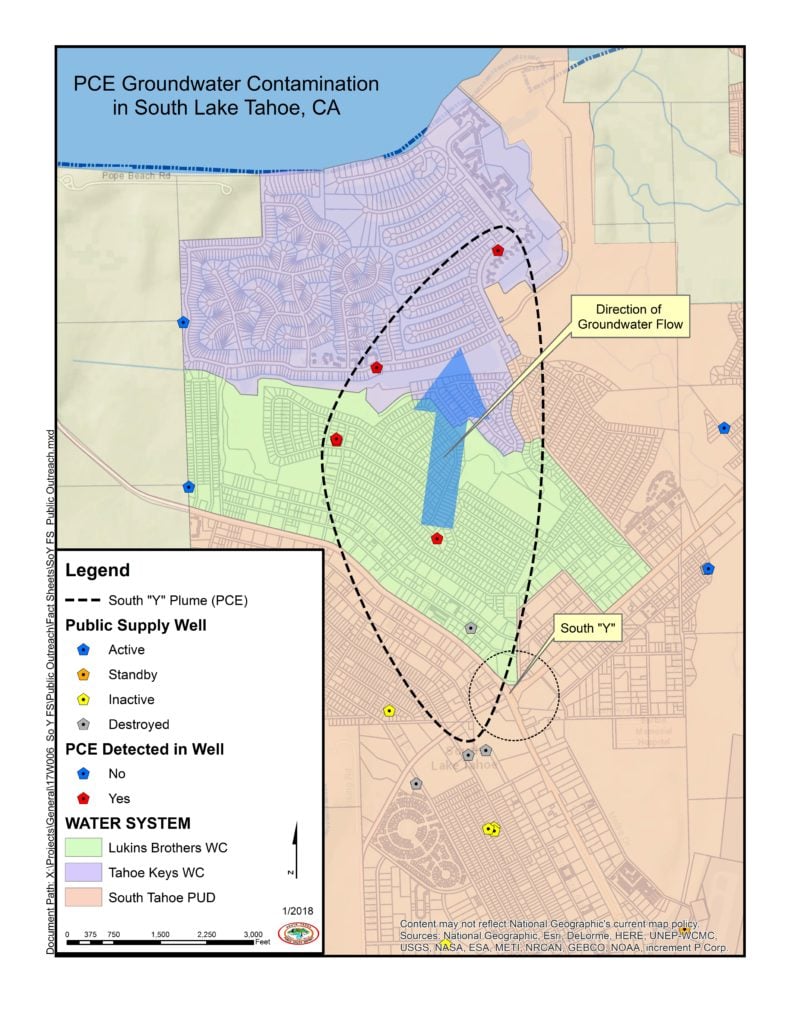